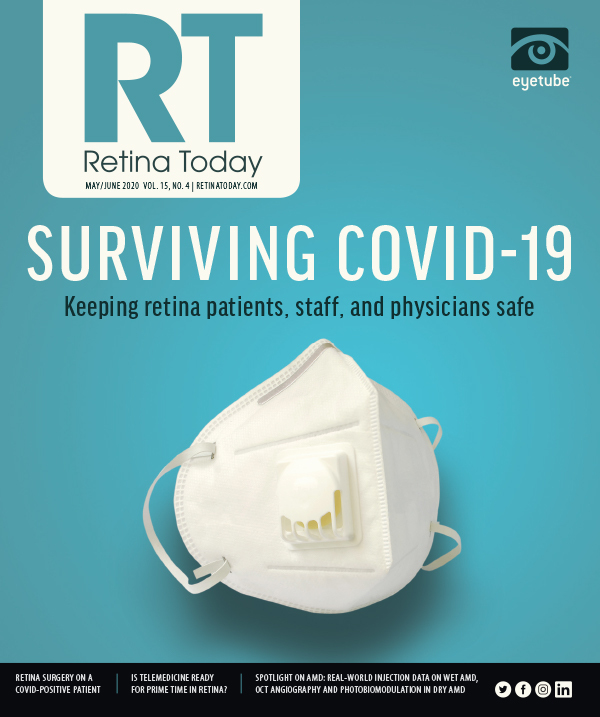 Even as the COVID-19 pandemic rages, news in ophthalmology doesn’t stop. Retina Today collected these news items unrelated to the COVID-19 crisis.

ASRS to Hold Virtual Meeting for 2020

In light of public health and safety concerns related to COVID-19, the board of directors of the American Society of Retina Specialists decided to conduct its 2020 Annual Meeting virtually, the organization announced in May.

The in-person meeting had been scheduled to be held in Seattle, July 24-26. In light of the fact that many potential attendees had already blocked out those dates to attend, the live streaming portion of the event will be held on the same dates, starting the evening of July 24 and ending the afternoon of July 26.

The organizers said they “plan to deliver the latest research to the global community using a virtual format that respects the contributions of the authors.” They will be making more program details available and will be contacting contributors to the scientific portion of the meeting with details about their submissions.

Bausch + Lomb has entered into an exclusive licensing agreement with Stada Arzneimittel and its development partner, Xbrane Biopharma, a developer of biosimilars, to develop and commercialize a biosimilar candidate to ranibizumab (Lucentis, Genentech) in the United States and Canada. The companies aim to obtain all currently approved indications for the reference biologic in both the United States and Canada. They announced the agreement jointly in a May press release.

The European generics and biosimilars companies Stada and Xbrane will be jointly responsible for finalizing development of the biosimilar, currently known as Xlucane, according to the release. Xbrane will also provide commercial supply. Bausch + Lomb will be responsible for the sales, marketing, and other commercialization efforts for the biosimilar candidate in the United States and Canada after regulatory approval.

Under the terms of the agreement, Bausch + Lomb will make an upfront payment of several million US dollars and further milestone payments subject to approval and launch of the product in the United States. Stada and Xbrane will be entitled to a share of gross profits from sales of the product and will share equally in the proceeds they receive from Bausch + Lomb.

Vision gains seen at 1 year with abicipar pegol dosed every 8 weeks and every 12 weeks were maintained in year 2 in two phase 3 clinical trials in patients with neovascular age-related macular degeneration (AMD), according to an article in press in Ophthalmology.1 The vision gains in year 2 were sustained with quarterly injections of abicipar, compared to monthly injections of ranibizumab, the study’s authors said.

The two randomized multicenter phase 3 clinical trials, CEDAR and SEQUOIA, had identical protocols, and data from both trials were pooled for analysis. The trials compared the efficacy and safety of abicipar every 8 weeks or quarterly (after monthly loading doses) versus ranibizumab every 4 weeks in treatment-naïve patients with wet AMD. The top-line results of the trial were announced last year by the developers of abicipar, Allergan and Molecular Partners.

According to the article in press, abicipar every 8 weeks and every 12 weeks were both noninferior to ranibizumab every 4 weeks in the primary endpoint of stable vision at week 52. Intraocular inflammation was more frequent with abicipar.